The town of lies 12 miles  to the west of and a similar distance to the south of at a point on the old Worcestershire and Staffordshire border. The original township (Sturbrug or Sturesbridge) probably dates back to the 12th century when it was part of the manor of Swynford. The name was undoubtedly due to a bridge across the River Stour at this point. Over the Centuries the town developed from market town to woollen cloth production and then in the 17th Century came the industry for which it has remained best known, that is the production of glass and glass objects. With the “Industrial Revolution” came manufacturing industry, canals and a railway line. The glass industry declined during the later stages of the 20th Century, but manufacturing industry has remained although changing nature with the years. With the railway line and the close proximity of motorways the town does also to some extent serve as a dormitory town for other towns and cities. Although originally in Worcestershire, due to boundary changes, in 1974,  Stourbridge became part of Dudley Metropolitan Borough in the . 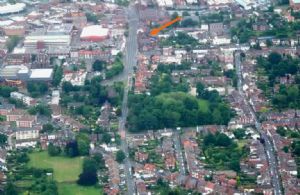 Methodism in the had had a somewhat mixed reception in Wednesbury  between  1740 and 1743 with riots greeting the Wesley brothers in 1743, but within a few decades things had very much settled down in their favour. In 1805 the first established Methodist  group came into being in Stourbridge and a was first constructed on the site of the present Church.

There has been a Methodist church operating on this site since 1805. The present schoolroom block was built and opened in 1886. The present church worship building was built in 1928, together with a single storey building to the rear, when the 1805 building had been adjudged to be beyond economic maintenance. In 1971 a first floor was incorporated into the “school” building and in 1987 the ground floor was modified to include a new kitchen. 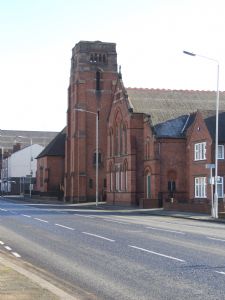 New Road Church with School  Buildings to the right.

Since that time the suite of church buildings has remained unchanged apart from the addition of two stained glass windows within the church worship area. The 1928 railings were given towards the war effort having since been replaced and re‑aligned when the Stourbridge ring road was constructed. 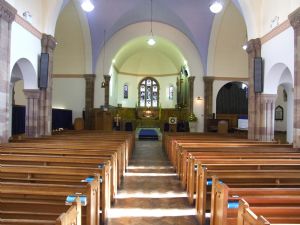 Internal view of church facing altar - prior to re-development.

There was also a two storey caretaker's cottage which was built in 1928 and which has recently been demolished for future developments.

When the Stourbridge ring road was constructed in the 1960s' it had a significant impact upon the entry and exit from the church buildings and the rear car park affecting both pedestrians and cars. This has since been magnified by the recent legislation regarding Health & Safety and provision of facilities for the disabled to comply with the Disability Discrimination Act.

It has now become necessary to update the present facilities to meet the 21st  century requirements for the current users and with the intention of increasing our existing outreach into the local community particularly with regard to the young people, the elderly and events.

As with most church communities the number of people coming to church has steadily reduced over the years with the present church worship area becoming larger than our present needs for Sunday Worship alone. The schooIroom block which is about 120 years old together with some of the ancillary buildings are too expensive to maintain and heat. In fact the heating and lighting systems are old and out of date for community use. With these facts in mind, together with our intention to remain a viable organisation with much to offer in the local community and with environmental impact very much in our minds as well as those of the public at large it has become necessary to address these problems.

Accordingly in 2001 a development committee was formed to study our long term community and building needs. The present refurbishments ar a result of this. 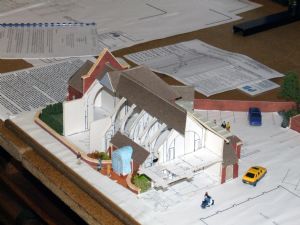 Model of re-developed building as displayed in the church.